Overview of the governing equations of fluid mechanics

Before diving into the forms of governing equations, let us understand why this distinction between forms is being made. Even though the equations existed in both forms until the 1980s, they were not labelled as conservation or non-conservation and no form was preferred over the other.

With advancing computing systems, researchers discovered a behavioural difference in these forms when solving them numerically. Hence, the forms are the same from a theoretical/mathematical perspective. Both forms suitably represent the fundamental physical principles of mass conservation and satisfy Newton’s Second Law and energy conservation.

Both forms can be converted into one another using calculus. However, from the numerical perspective, the choice of one form over another might mean the world of a difference. This will be studied in further sections of this article.

Understanding the forms in governing equations

As we learnt earlier, each form will have three equations representing the conservation of mass, momentum and energy. Let us consider the continuity equation derived for an infinitesimal control volume as shown below:

The second difference that can be noticed is the position of the nabla (∇) operator. It is known as the differential/divergence operator whose dot product with a vector gives the divergence (volume intensity of outward flux) of that vector field.

What do these differences tell us?

An interesting point to note in the continuity equation in conservation form is that the quantity that the divergence operator is acting on is nothing but the mass flux (rate of mass flow per unit area or the momentum per unit volume) which makes sense only when the control volume is not moving. This feature continues to occur in the momentum and energy equations, and also whenever the divergence operator acts on momentum flux and energy flux. The differences mentioned above help us distinguish the conservation form against the non-conservation form of equations.

How do we arrive at each form of governing equation?

There are two approaches to deriving the governing equations in fluid dynamics.

In this approach, we have a fixed point in space and record the properties of fluid elements passing through it.

In this approach, we follow the fluid particles as they travel through the flow. 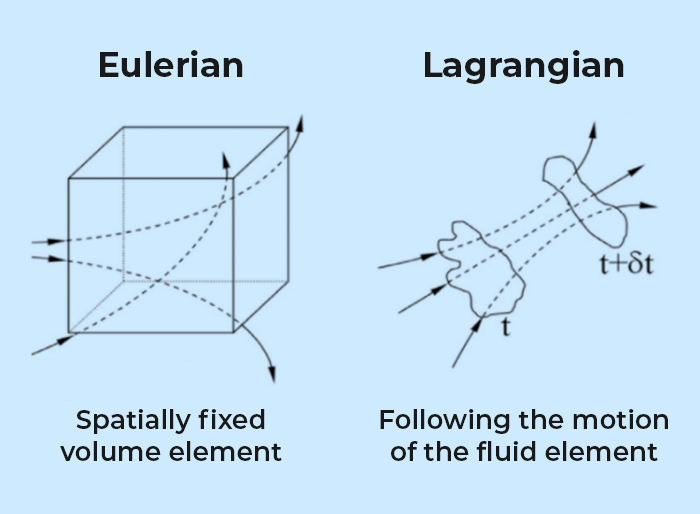 Why do we prefer one form over another?

For many engineering problems, one can use any of the two forms. However, the distinctive properties of the forms make each of them more suitable for some problems. Let us compare both forms in terms of the following aspects:

In terms of programming convenience, the non-conservation form is the better of the two. It is easier to program because the equations are solved in terms of the primitive variables    (ρ, V, T) and their values can be obtained directly.

It is important to note that an increased number of calculations will lead to more errors due to the computers constantly rounding-off decimal values to machine precision. In that respect, if we consider the flux variables, however, the conservation equations are more accurate for the same reasons mentioned above.

The most important difference between the two forms is in terms of their stability. It is important to understand that the equations that we solve in CFD may not always be continuous. Discontinuities may arise in some regions of the domain, on account of the physical or mathematical nature of the equations we’re solving.

Primitive variables like density, temperature, and velocity might experience a sudden jump across these discontinuities. When the governing equation is expressed using primitive variables (like in non-conservation form), large gradients could be observed in the solution, causing it to blow up.

On the other hand, the flux variables possess an interesting property that they remain constant across shocks or discontinuities. This is phenomenon is illustrated by comparing the behaviour of two primitive and flux variables across a shock in the picture shown below: 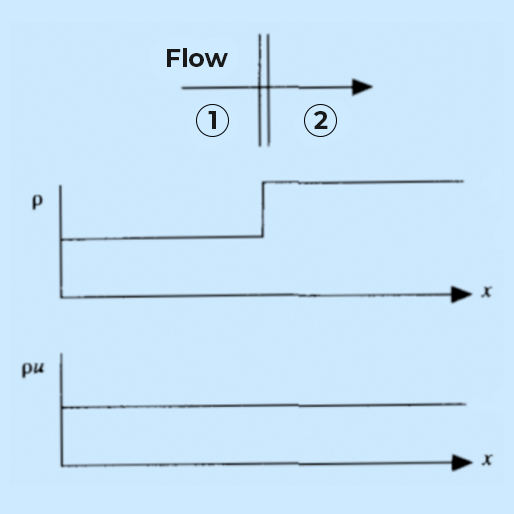 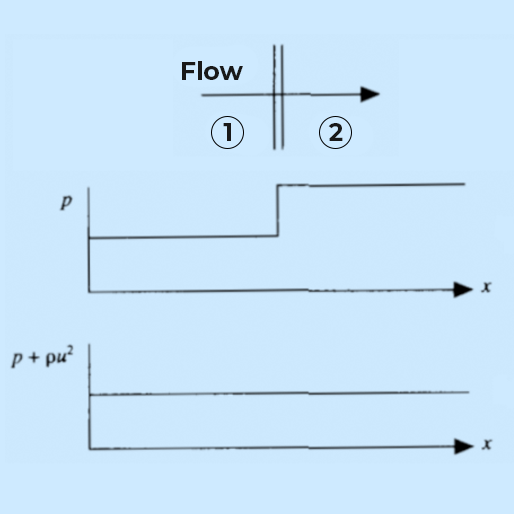 There are two basic approaches to handling shocks in CFD problems involving shock waves. One is the shock-capturing approach, where the shock waves appear naturally inside the solution as a result of the simulation. This approach is usually followed when dealing with complex problems where the location and number of shock waves are not known.

The other is the shock-fitting approach, where the shock waves are explicitly introduced into the solution as a discontinuity and the disturbance/information is allowed to propagate upstream and downstream of the shock using special relations.

In the shock-capturing method, we are trying to resolve the shock, and since the large gradients might cause instability inside the solution, the conservation form is the better choice. Whereas, in the shock-fitting approach, since we are introducing the shock ourselves, and are sure that no other discontinuities exist, the non-conservation form would be the better choice. This would be faster and easier to program and gives a more accurate result for the primitive variables.

In conclusion, one form of governing equations will not work for all problems. While the non-conservation form gives a more accurate result, the conservation form shows better conservation properties. While the former works better for shock-fitting applications, the latter works better for shock-capturing ones. Therefore, the choice of form largely depends on the nature of the problem and the critical parameters being measured.